Discover the Koran, a divine universal message for all of humanity, now available free and in your own language!

With this app you will be able to read the Holy Quran in Urdu and download it for free on your mobile device.

The sacred book for the Muslims, also called Koran, Al Quran or Qur’an, contains the Word of God (Allah) revealed to the prophet Mohammed.

The word Koran comes from the Arab Al-Quran, which means “Recitation” or ” Sacred Text that is recited “. Mohammed received these revelations and transmitted them orally. After his death, in the year 632, his followers began to assemble the revealed texts taking the form of the book which we know today.

The Koran expresses the creed and the law of the Muslims. It is the source of faith of every Muslim. It refers to God’s relation with his creatures and it offers a guide with educations for a fair society and a correct human conduct. The Koran is outlined for its beauty, its poetry and its literary perfection.

The unique style of the Quran demonstrates its divine origin and continues astonishing intellectual people, without mattering if they are believers.
It is a book that million people memorize day after day. 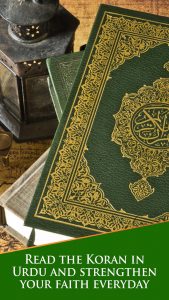 The original text of the Qur’an was written in classic Arabic, but many translations in different languages exist. The first translation was in Latin in 1143.
Now you can enjoy the sacred book of the Muslims, in Urdu.

The Holy Quran is organized into separate chapters called Suras and each one of these is divided into verses.

We invite all of you to read the Quran!
Download it now and enjoy the Muslim Holy book with Urdu translation!.